The Town of Sherman in Dunn County, Wisconsin is a 36-square mile area (6 miles by 6 miles) located north of the City of Menomonie and South of the Village of Boyceville in Dunn County.  The East part of Dunn County is fairly level and mostly prairie, some marsh land, and is easily worked and productive agricultural land.  The western portion of Dunn County is more rolling hills that were covered in substantial forests that became excellent farmland after the logging was completed.  Currently the area is mostly farms.

Outdoor activities in Dunn County include extensive ATV trails.  Contact dunncountyatv@gmail.com or 715-255-0885 and on Facebook.  There are also many other activities to enjoy in the area, including, hiking the Red Cedar Trail, which is a 14.5-mile trail that shadows the steep walls of the Red Cedar Valley and connects to the Chippewa River State Trail.  Activities incudes hiking, bicycling, canoeing, kayaking, cross-country skiing, snowshoeing and winter biking, snowmobiling, and hunting.  Click here for further information

Hoffman Hills State Recreation Area, 700-aces of preserved and restored wooded hills and wetland with hiking trials that are open year around and include groomed cross-county ski trails and snowshoeing or hiking. The highlight may be the 60-foot-high observation tower.  Hoffman Hills also is an excellent park for bird watching.  Click here for further information

There are numerous other parks are in Dunn County close to the Town of Sherman:

Dunn County was named for Charles Dunn, the first Chief Justice of the Supreme Court for the territory of Wisconsin (1836-1848).  Justice Dunn was appointed by President Andrew Jackson.  The area was first commercialized by the Europeans with fur trading and then transitioned to lumber.

Lumbering operations were started in what is now the City of Menomonie in 1822.  The first operational lumber mill was successfully built, and operations started in the mid-1830s.

Lumber reigned, and for a period of time, Dunn County was the world’s largest lumber operation.  Knapp Stout & Co (and its predecessor companies) was the area’s largest mill.  Knapp Stout & Co continued as a very successful mill until it sawed its last log and closed its doors in this area in 1901.  In addition to the direct benefits of the lumber milling business, lumber brought agriculture and other manufacturing which are still a significant part of the local economy today.  At its height, Knapp Stout & Co employed more than 2,000 employees and sent more than 85 million board feet of lumber down the area rivers to St. Louis, Missouri. 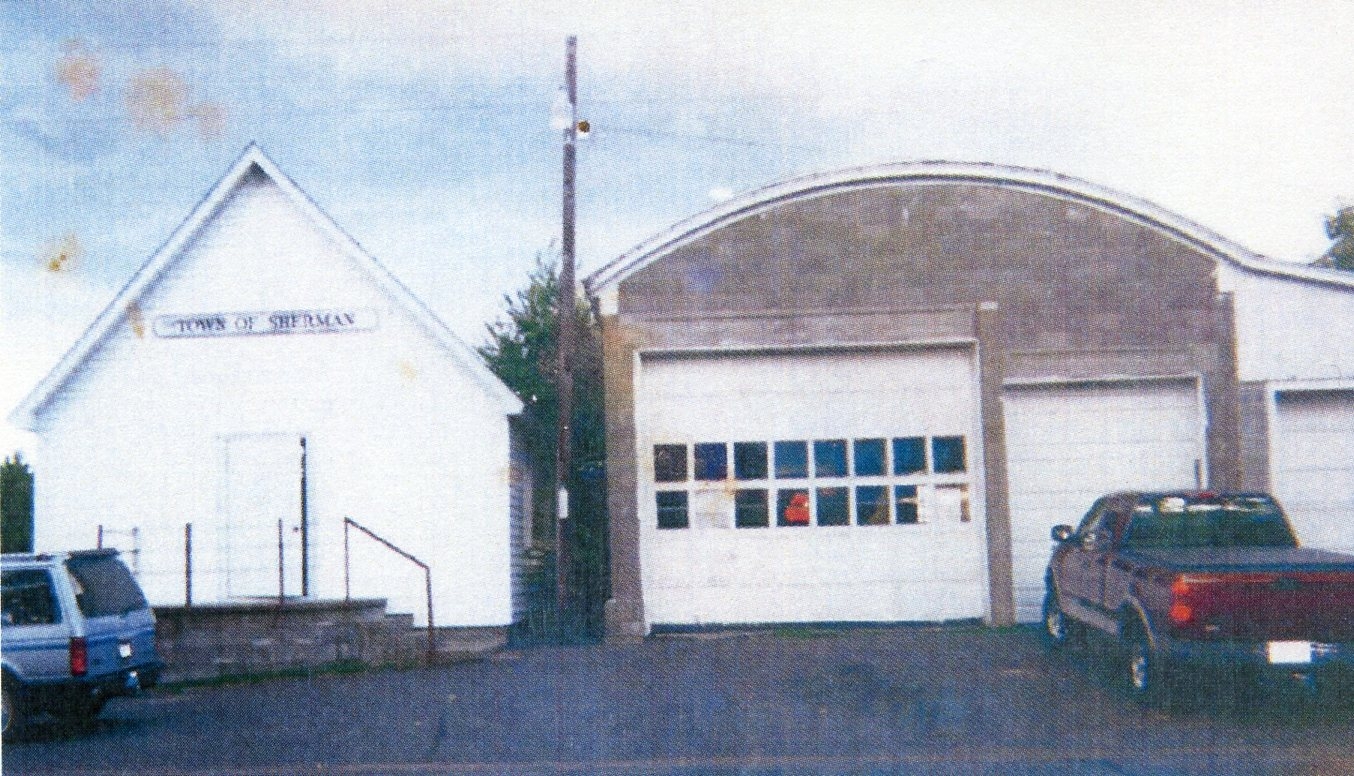 In 2004, a new Town Hall was built to accommodate the town’s growing number of residents.  The new Town Hall is a mile south of the first one at 12457 County Road F and has large meeting area as well as enough space for voting activities.  This location also has a building to house its equipment.

Of historical significance in the Town of Sherman is a wooden bridge known as “the Warren Pony Truss Bridge” which may have been the location of the first “truss bridge” in the state of Wisconsin.  A type of bridge design called a “Warren truss bridge” is so named because the load-bearing part of the structure is a truss, typically a triangle.  Warren Truss bridges are also known as an equilateral truss bridges because they used a weight-saving design of equilateral triangles.  (Patented by James Warren in 1848.).  Prior to the building of railroads, truss bridges were typically made of wood.  The Warren Pony Truss Bridge was wood and is believed to be built in 1906 or 1907 and was part of the original (old) Highway 12 in Dunn County.  It was purchased jointly by the Towns of Sherman and Menomonie and moved to the border of the 2 towns on Wahl Road in 1927.  The bridge skeleton was moved in one piece using a team of horses and a Ford Model T truck. Oak timbers (which were probably cut at the bridge site) were set.  A method of drawing the bridge across the timbers was used to place the bridge.   The Warren Pony Truss Bridge has since been removed when it could no longer handle the increased traffic load.  The Town of Sherman board made efforts to find a new home for the truss bridge, but the town was unable to find an interested party.

For history buffs, the Dunn County Historical Society has records of the area that are fascinating.  The Red Cedar Junction Railroad line that was constructed in 1882 and was used by Knapp Stout & Co to log the area was abandoned and acquired by the Wisconsin DNR which would later become the Red Cedar State Trail (development of the trail started in 1975 and was completed in 1981).

In 1901 the Dunn County School of Agriculture and Domestic Economy was founded; it was the first agriculture high school in the United States and operated until 1957 when it became The Stout College; it later     becomes the University of Wisconsin, Stout, in 1971.

The plat maps show the owners of the property and in some years, also the location of schools and/or school districts.  Here are a few that we thought you may find interesting. 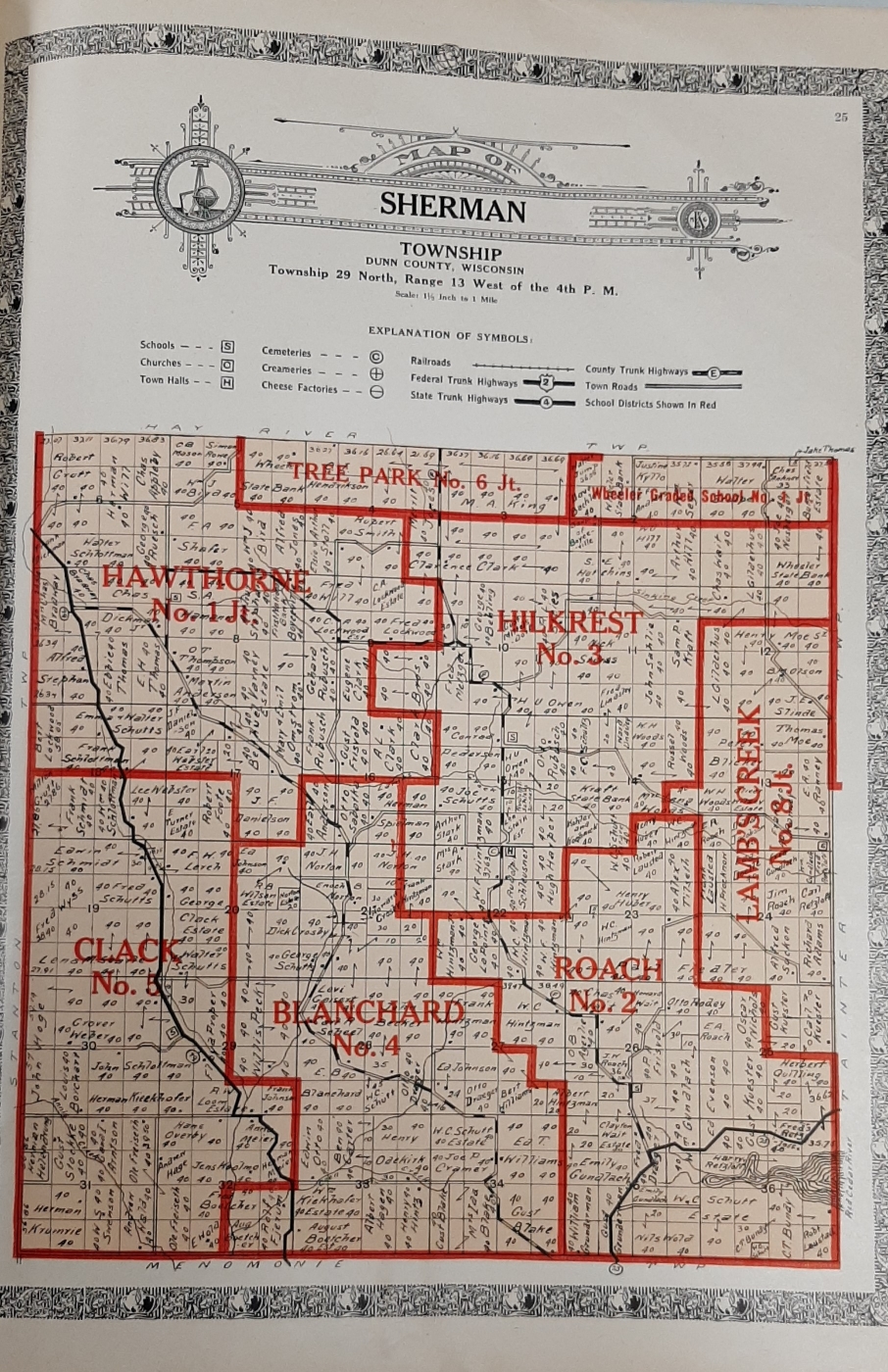 The 1915 plat map has a good map of all the towns in Dunn County.

The earliest plat map on record at the historical society is the 1870 map.  The census that same year shows 60 families living in the Town of Sherman. 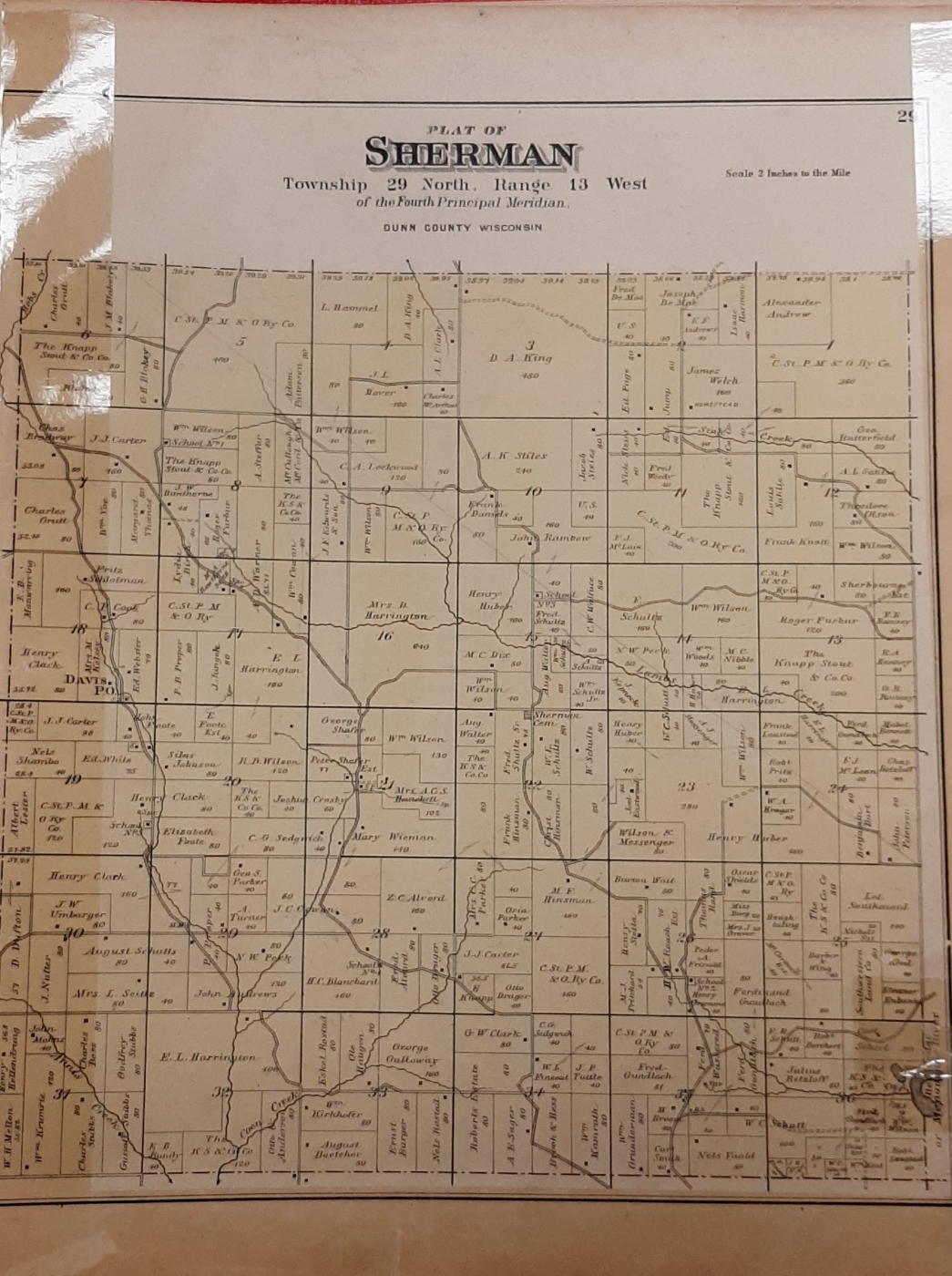 (1870 Plat Map with Census showing 60 families living in the Town of Sherman.) 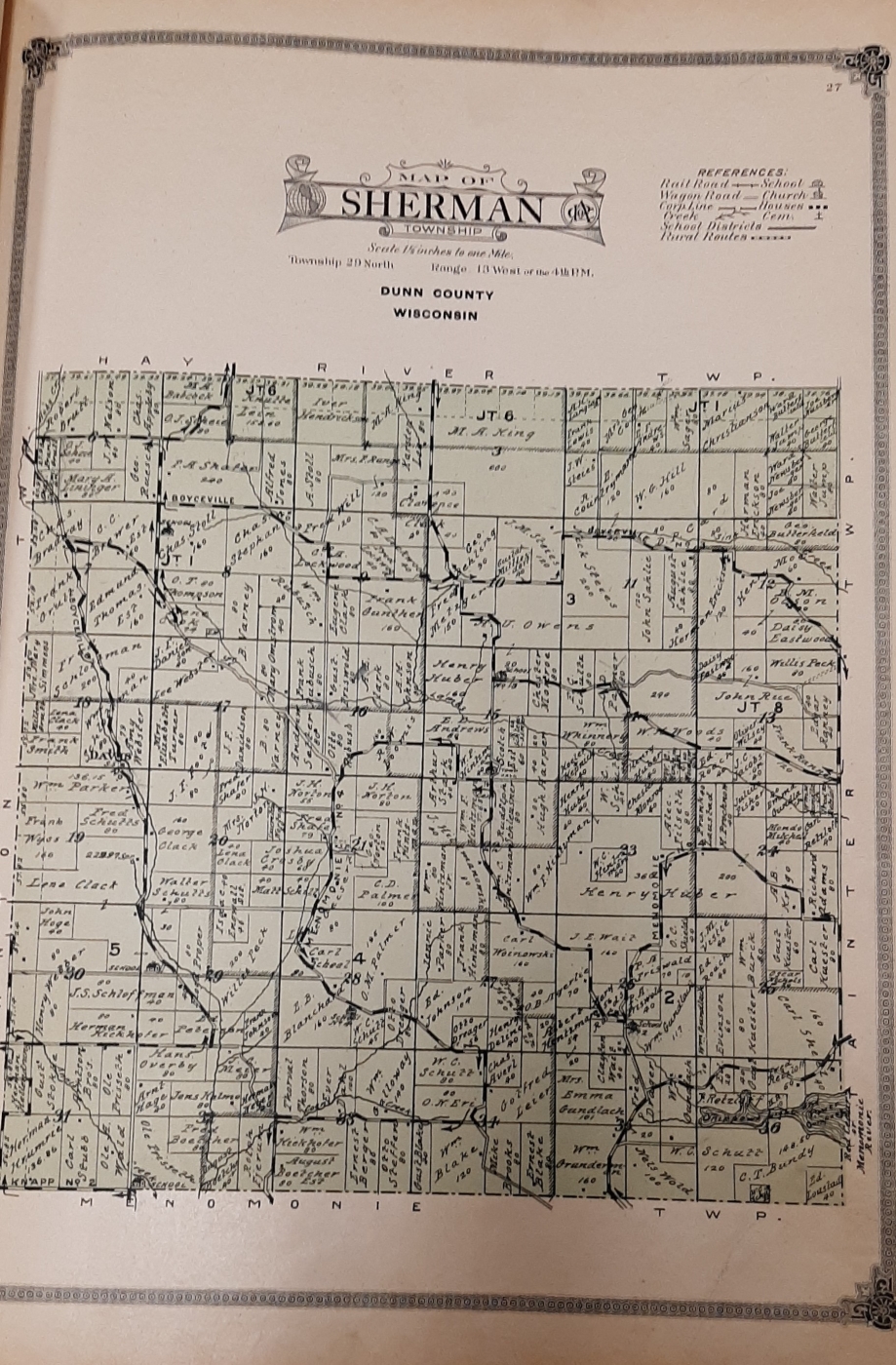 Sources:  Thanks go out to Beth Ford, for the written history from information received from Clarence Ford, about the History of the Warren Pony Truss Bridge on Wahl Road and a copy of the article by LeAnn Ralph, “Old Sherman Bridge may have been first in state” in the Tribune Press Reporter.  Thank you to the Dunn County Historical Society staff in locating plats and other documents, plus their website, History of Dunn County, Wisconsin by Curtis-Wedge (1925), other websites as cited.